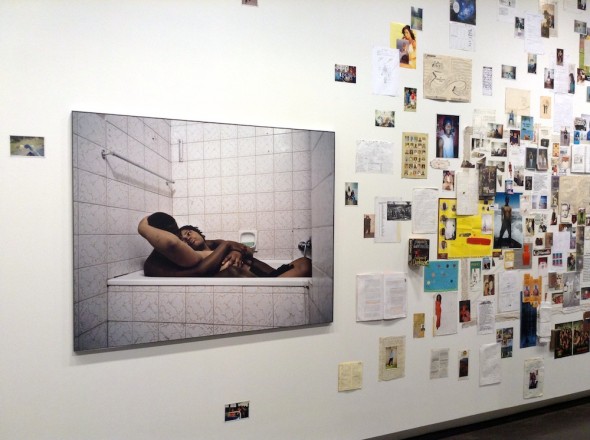 What happens when the job at hand is to document a 54 story high building, former architectural jewel/utopia, and current rat hole, just about to undergo some serious transformation? That is the question Mikael Subotzky was facing when he began his work on the tower of Ponte, in Johannesburg in 2007. His answer is a protean attempt to exhaust the place, combining a systematic/automatic documentation of every opening of every apartement (each window, each front door, and each television), along with his “regular” documentation of people’s lives in their homes, as well as images and documents that he did not create, but only compile.

What characterizes a place where people live ? The physical structure, or the nature of its inhabitants? In Mary Ellen Mark’s seminal project about prostitution in Bombay in the late 70s, even though it bore the name “Falkland Road”, it includes only two images of the road itself, and focuses solely on its workers and clients. On the other hand when Raphaël Dallaporta makes a project about domestic slavery in France, not a single person gets included in his images, but only architectural images of the buildings where the sequestrations occurred. Oftentimes photographers will include a bit of both in order to place the figures in a physical/geographical context, under one coherent photographic authorship, as Bruce Davidson son wonderfully did in his “East 100th Street”. But even this latter approach can only provide for an account of what this place was at/during a certain time, that of the photographer’s presence. Mikhael Subotzky –later joined by Patrick Waterhouse- did work on this project for a few years, that is still insufficient to tell its complete story. For that reason they decided to include other sources than their own images, other voices than just theirs: architectural plans, or advertising images both from when the tower was built, and from when it was restored. So: technical, commercial and documentary images are not only mixed, but combine to make for a far richer “tale” of what this place has been (and has been dreamed to become).

It is funny to notice that even though their gazes are fixed on the building itself, none of the found documents refer to it (except for official documents, such as eviction notices and such): they act as doors to other places and other times. Family photos made in other countries, film videos, music cassettes, school books, Jehova’s Witness’ publications, calendars, are as many attempts not to be where the people who own them were. As many things left behind when they did leave, ironically.

This layering of sources and informations is what characterizes the exhibition now on the walls of Le Bal: physically putting things on top of each other, some pinned to the wall, some framed and hung on the wall, and some pinned on top of the ones hung on the wall! Which leaves the responsibility of making sense of it all, of making connections between all the elements provided to the viewer. Which gives credit to the viewer, assuming he will have the intelligence to dive in. Also providing him the freedom to dive it, as it breaks from a traditional frames from left to right at eye level sort of approach: things (litteraly, there are things on the wall) are just there for one to be drawn to, or not.

Le Bal had already used a somewhat similar strategy when doing a retrospective of Antoine d’Agata’s work (discussed in this post), but what is interesting here is the fact that this curatorial choice participates in the challenging of the very notion of the photographer as author. Some of the photos my Subotzky are indeed printed large, and nicely framed. But the exact same frame might be used on the same wall with an enlargement of a clipping from a local newspaper, or with a blown up version of a found photograph. Perhaps more than “challenge” the notion of photographer as author, it shifts its scope: the author is not only the one with a vast and documented understanding of what he is talking about, he is also the one curating the gathering of other sources. This seems to be one of the new directions photography is taking these days, as the current issue of Aperture Magazine, “Documentary, expanded” suggests. Sometimes using modern social media tools to give a voice to the community being talked about, or simply including objects left behind by that community (which was the sole strategy of the poignant book “Found photos in Detroit”).

This diversity of practices and sources allows the authors to overcome their physical limitations: they will thus cover more material than what they were able to witness, and go back in time further than the day the project started.